Earlier this year, the International Organization for Standardization, known as ISO published a technical report on hydrogen embrittlement. The technical report ISO/TR 20491 (Fasteners - Fundamentals of hydrogen embrittlement in steel fasteners) was published earlier this year (2019). Fasteners sustaining hydrogen embrittlement (HE) experience a permanent loss of ductility due to atomic hydrogen coupled with tensile stress affecting the cohesion of the metal. Fasteners experiencing HE can fail in a brittle manner after a period of time. The atomic hydrogen (individual atoms as opposed to the much more common hydrogen molecule H2) can be introduced from the manufacturing process (such as from plating) or from the environment (by for example corrosion). It can affect high strength fasteners, such as those of property class 12.9. The technical report presents the findings of some latest research.

One controversial aspect of the technical report is that it asserts that property class 10.9 fasteners have no significant susceptibility to hydrogen embrittlement failure assuming that the fasteners are produced using appropriately selected steel, well-controlled steel making and fastener manufacturing processes. This approach is carried over to the latest version of the ISO 4042 standard (Fasteners: Electroplated coated systems) in which 'baking' following plating has become optional if process verification is completed. (Baking is a low temperature heat treatment whose purpose is to eliminate any trapped hydrogen generated from the plating process). Some fastener specialists are concerned over this change in that, they believe, will significantly increase the risk of HE. 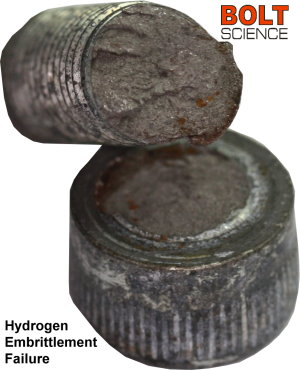 The second concern is that any property class 10.9 fasteners experiencing environmental hydrogen embrittlement (EHE) will be blamed upon the fastener manufacturer/distributor. Up to this point, fasteners that fail after a period of months in service is likely to be due to EHE rather than HE from the manufacturing process. If it's HE from the manufacturing process, the fastener manufacturer is usually deemed at fault. If it's EHE, the Engineer specifying the wrong material/fastener grade in that application is usually blamed. It can be a multi-million dollar question since a product campaign change is often required to prevent further failures. High strength fasteners have, up to the release of the technical report, been considered as inherently susceptible to HE. HE failures can be very expensive since they often require a product campaign change. Now, any 10.9 fasteners failing due to HE or EHE can be argued (likely in a Law Court), that the fastener manufacturer was at fault rather than the Engineer specifying the high strength fastener in that particular application.

Hydrogen Embrittlement of fasteners is an issue our ...

What is thread galling?